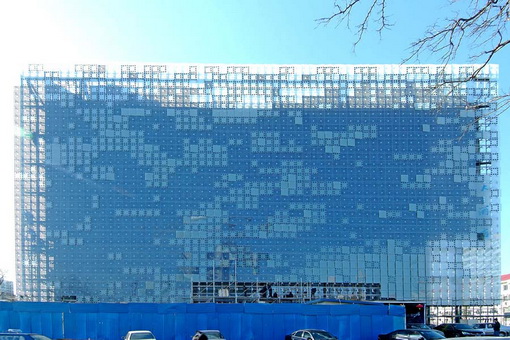 GreenPix – Zero Energy Media Wall – is a groundbreaking project applying sustainable and digital mediatechnology to the curtain wall of Xicui entertainment complex in Beijing, near the site of the 2008 Olympics.Featuring the largest color LED display worldwide and the first photovoltaic system integrated into a glass curtain wall in China, the building performs as a self-sufficient organic system, harvesting solar energy by day and using it to illuminate the screen after dark, mirroring a day’s climatic cycle.The Media Wall will provide the city of Beijing with its first venue dedicated to digital media art, while offering the most radical example of sustainable technology applied to an entire building’s envelope to date. The building will open to the public in May 2008, with a specially commissioned program of video installations and live performances by artists from China, Europe and the US.The project was designed and implemented by Simone Giostra & Partners, a New York-based office with a solid reputation for its innovative curtain walls in Europe and the US, with lighting design and façade engineering by Arup in London and Beijing. Content manager Luisa Gui will coordinate the opening program with software development by New York-based media artist Jeremy Rotsztain. 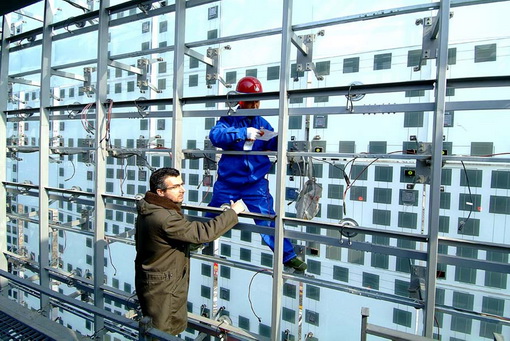 Greenpix behaves like an organic system, absorbing solar energy during the day and then generating light from the same power that evening. The project promotes the uncompromised integration of sustainable technology in new Chinese architecture, responding to the aggressive and unregulated economic development currently undertaken by the industry, often at the expense of the environment.With the support of leading German manufacturers Schueco and SunWays, the architect Simone Giostra with Arup developed a new technology for laminating photovoltaic cells in a glass curtain wall and oversaw the production of the first glass solar panels by Chinese manufacturer SunTech. The polycrystalline photovoltaic cells are laminated within the glass of the curtain wall and placed with changing density on the entire building’s skin.The density pattern increases building’s performance, allowing natural light when required by interior program, while reducing heat gain and transforming excessive solar radiation into energy for the media wall.

GreenPix is a large-scale display comprising of 2,292 color (RGB) LED’s light points comparable to a 24,000 sq. ft. (2.200 m2) monitor screen for dynamic content display. The very large scale and the characteristic low resolution of the screen enhances the abstract visual qualities of the medium, providing an art-specific communication form in contrast to commercial applications of high resolution screens in conventional media façades.