MAI is part of the CONNECTING CITIES NETWORK , an EU project with 17 organisations in 14 cities

Installation at the fore court of Customs House Sydney as part of the Sydney Architecture Festival, joint project with UNSW Sydney.

Chromapollination was designed as an interactive light sculpture in a neglected urban space and exhibited as part of Vivid 2012 with contributions from the MAI. (Image: BillOggPhotography)

BOXLEDs installation designed and developed by the MAI for the Media Architecture Biennale 2010 in Vienna, Austria. 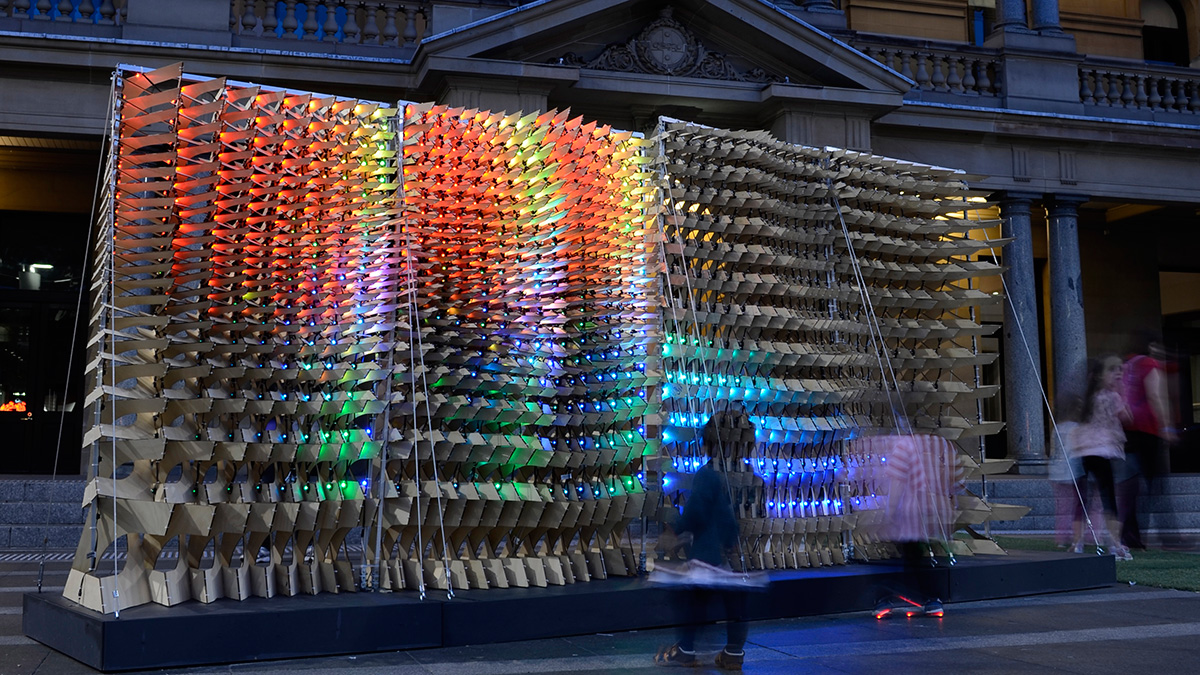 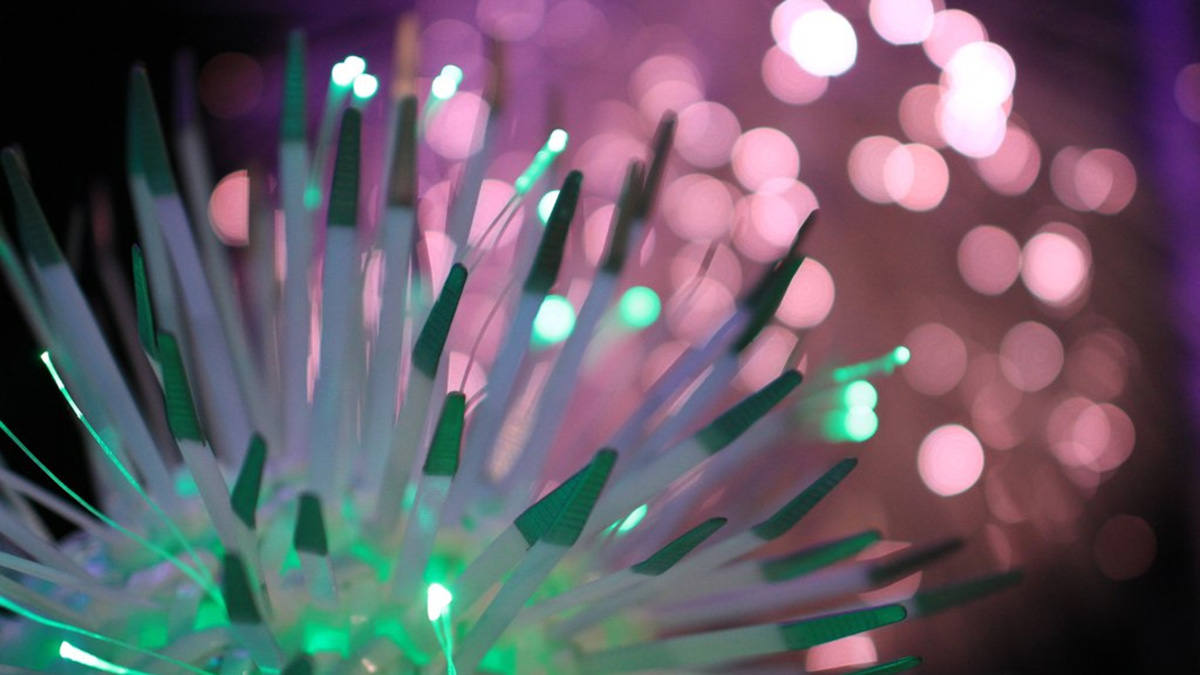 The Flederhaus media façade is a collaboration between the Media Architecture Institute and Artportal.

The Flederhaus media façade is in Aspern, an urban development area in the 22nd district of Vienna. Thefaçade is an experimental platform that artists, designers and citizens can use to visualize data, create interactive experiences and realize performative projects.

Orchestrating the depth of light (2014)

Joint project between MAI, the Ludwig-Maximilians Universität München, Städelschule Architecture Class and AHL Media Facade.
Orchestrating the depth of light is an installation that uses LED i.e. light emitting diodes to create an interactive experience in the city. If a person triggers a camera flash in front of the installation, the LED lights will start to blink across the structure. The blinking starts close to the point where the flash was triggered and wander slowly away. This set-up mimics the natural reflexions of the light. (more…)

EU project with 17 organisations in 14 cities / Cavi
MAI is part of the CONNECTING CITIES NETWORK. CONNECTING CITIES is a European and worldwide expanding network aiming to build up a connected infrastructure of media facades, urban screens, projection walls and mobile units to circulate artistic and social content. Together we investigate the questions: How can we open live-windows with urban media facades to create a dialogue with neighbourhoods beyond physical borders? How can we use a mainly commercial infrastructure for ideas of human futures? Within three city visions: the Networked City 2013, the Participatory City 2014 and the Visible City 2015 (more…)

Joint project between MAI and Aarhus University / Cavi
The City Hall Tower was one of the major outdoor installations during the Media Architecture Biennale 2012 which happened in Aarhus-Denmark. We lit up the tower on four levels using 5500 AHL´s S25-3 pixels. The content which is shown is part of the “City Bug Report”, a system where the citizens of Aarhus can report problems in their home town via internet or even via smart phone. Each of the moving balls represents a bug in a different stage in respect of time and status. At the end when the problem is solved the bug dies in a white fade out. The City Hall Tower now became the most visible representative of this forward – looking and democratic tool which guides us the way to the Smart City! (more…)

Proposal for curating a media facade competition to retrofit a facade of a Telstra switchboard. The concept study was investigating the potentials for staging an international competition of a media facade together with a parallel media content development in order to activate abandon inner-city spaces adjacent to the switchboards. The Institute was commissioned for this study due to our large network with designers, architects and content developers in media architecture.

The Institute was asked by Wanda, one of the largest developers in China to develop a proposal for media content for a media façade for a Wanda Shopping Center in Wuhan in the Hubei Province. The institute recommend six international design offices for the competition.

In collaboration with realitylab
Media Architecture for the rest of us: BoxLEDs is a lightweight and very flexible hard- and software toolbox for a new breed of social media applications in public space. Due to its flexibility and easy assembly the BoxLEDs were installed for a second time at the Media Facades Summit 2012 in Frankfurt. (more…)

Facilitated by UNSW Sydney in collaboration UTS Sydney
Polymedia Pixel is a computer-augmented architectural material. Stepping away from the perception of media facades as merely being a big screen, the conceptual starting point of the project is to redefine the use of computers in architecture and whether computer-augmented architectural materials can define space and catalyse inter-building communication. The Polymedia Pixel aims to be more like a smart phone, when it comes to its sensing and computing power, but in form of an architectural building component.(more…)

Concept for a media facade of the Musiktheater Linz (2010)

In collaboration with realitylab
Technical feasibility study for a media facade for the new Musiktheater. The concept envisioned covering the main southern facade facing the adjacent street with a series of LED strips. (more…) (German only)

In cooperation with TU Vienna
The Dynamic Ornament was developed as an experimental media facade installation for a continuous integration of digital media into public urban space. Screens are a common interface for digital media content to provide visual experiences for the viewer, but these experiences often only come in the form of advertising. This project was an attempt to provide an alternative solution to a development which is heading towards a massive commercialisation of public urban space. (more…)

Joint project carried out by UTS Sydney / UrbanAID
The project for the Smart Light Festival 2009 in Sydney proposes a pixel facade generated from 183 greyscale-controlled light spheres arranged as a giant human face hanging above the street to display captured facial expressions. Contrary to conventional screens that display media content on a flat display surface, the ‘Janus screen’ imitates the complexity and form of a face for a maximum number of curvatures combined in one surface. (more…)

In collaboration with realitylab
Development of software modules for media facades supporting the following functions: tracking, sensing, mobile apps, and connection to social networks. The application aims to optimise the impact of large screens on building facades in particular in an urban context. This new connection has the potential to combine digital networks with public space to allow applications for social networks, gaming and location-based media. Thus public spaces could be augmented through social interaction and entrepreneurship. (more…) (German only)