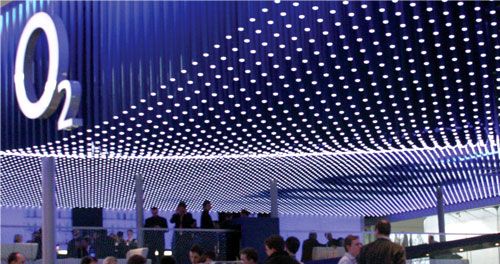 Mobile telephone provider O2 Germany presented a spectacular showcase at the CeBIT 2005 trade show. Their approach featured the new Versa Pixel–single dots that grouped together produced over 28,000 points of moving light. The technology was adapted for the event by Element Labs, a company known for making exceptional designs possible through the convergence of light and video.

The innovative concept and design, from Munich Studios’ KMS Team and Schmidhuber + Partner, was creating buzz even prior to the event. Installed by Mixed Pixels, the display consisted of Versa Pixels placed at the end of plastic tubes suspended from the ceiling. The varying tube lengths and spacing created distinct colorized pixels that merged into waves of images, giving visitors the impression of moving beneath a three dimensional “Media Cloud” with images wafting across it.

According to Rudi Hennies, the project’s technical manager, “The result absolutely stunning. Everyone attending CeBIT was mesmerized by the O2 ceiling; it was definitely the most popular thing at the show.” Hennies also noted, “The entire system was extremely well designed and much easier to install than anyone expected. Element Labs provided us with excellent support, and I look forward to working with them again in the future.”

The O2 exhibit also included a radio station that took advantage of the Tube´s remarkable adaptability. Changing content was effortless through the power of computer-controlled programming. During radio broadcasts, the tube content morphed to reflect radio news items, programs, and other events.