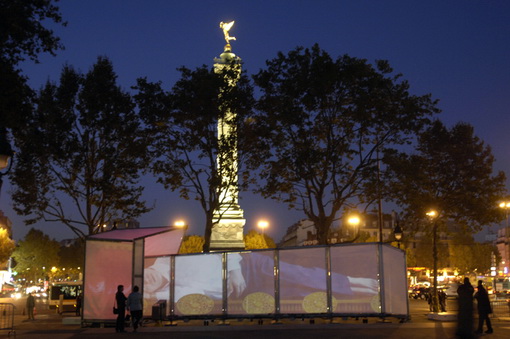 On October 6, Pleinmuseum visited Paris, as part of the Nuit Blanche. In cooperation with the Institut Néerlandais, celebrating its fiftieth anniversary, and the city of Paris, the pavilion stroke down at Place de la Bastille. Pleinmuseum is a mobile exhibition pavilion that places itself at the hearts of public life, opens as a flower, takes on new appearances every day and travels on after a while. Every evening from sunset Pleinmuseum will present a variety of the 100% digital collection. In each location also new artists are invited to create a new contribution to Pleinmuseum. 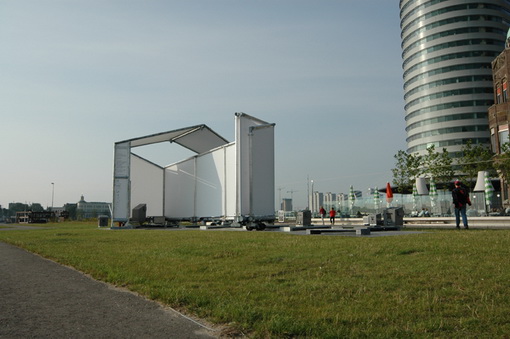 Pleinmuseum is a new concept: an open and flexible museum that is approachable and accessible, placed on a square in the city centre, forming a natural part of urban life. During daytime, the pavilion remains closed and as such symbolically refers to the ‘white cube’, the paradigmatic model of the modernist museum. After sunset, the cube opens itself hydraulically and forms a dynamic architectural installation that embraces space. The white walls become projection screens that continually take on new appearances, like the skin of a chameleon. In this manner, Pleinmuseum becomes a temporary stage for visual communication; a platform through which artists and designers can communicate with a broad audience. The designer of Pleinmuseum, René van Engelenburg, focuses on the relationship between art and public. He intends to develop projects, mostly mobile, temporary and open architectural structures that forge a dynamic relationship with public space, activating this space as the key physical and conceptual parameter for the ideas of the participating designers and artists. 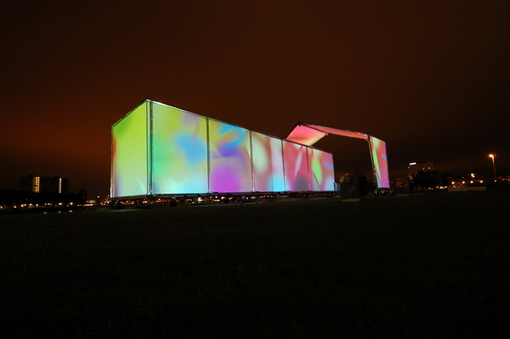