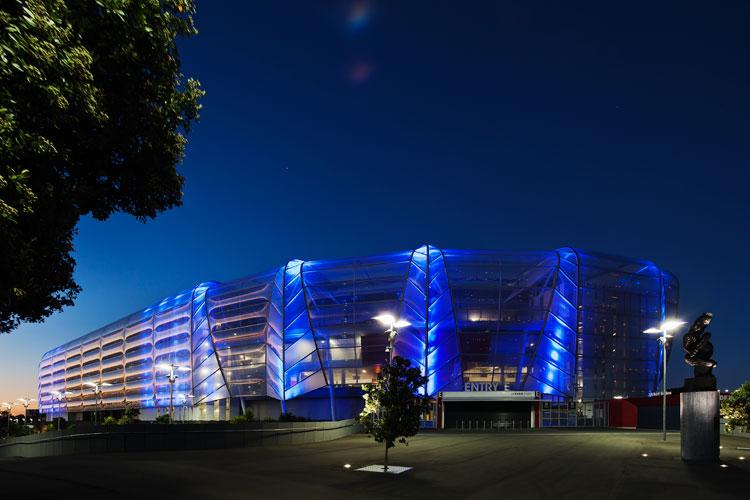 Eden Park, New Zealand’s largest sports ground, is well-known for hosting international and local cricket and rugby events. The Eden Park Trust recently renovated much of the stadium in order to provide an upgraded world stage for its high-profile events, such as the 2011 Rugby World Cup. Part of the redevelopment effort was a new 24,000-seat South stand, a three-tier structure that replaced the old South and South West. 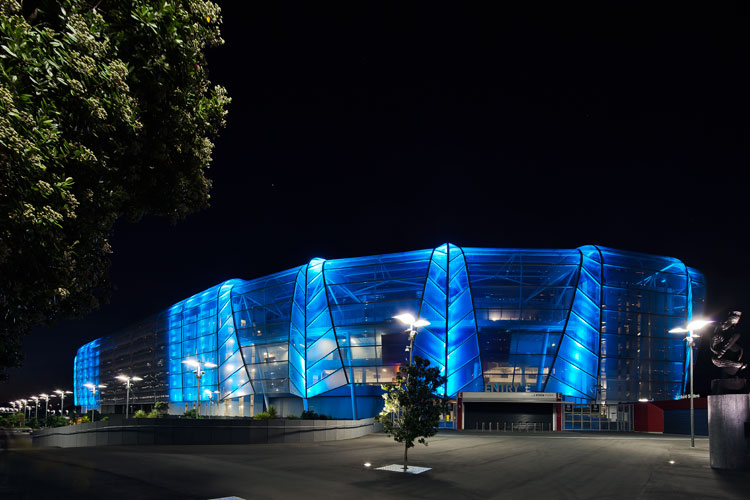 The Eden Park Trust needed dynamic lighting solution that would provide high-impact illumination for the South stand and enhance the stadium’s atmosphere and ambiance. Their requirement was that the lighting showcased the glass architecture and fern-shaped accents on the exterior of the stadium without overpowering its unique design. Philips partnered with New Zealand-based lighting designer Omar Shahab of Switch Lighting Design, Modus Lighting, and Aseco to complete the concept, design, and installation of the new light system. The team installed 24 varyingly spaced Philips Color Kinetics ColorReach Powercore LED flood light fixtures inside the lower rim of the glass façade. The fern structures are emphasized with saturated RGB light, while the rest of the South stand is lit in a vertical striped pattern, with dark spaces in between each stripe of light. Controlled by an iPlayer 3 controller, the new lighting solution allows the Eden Park Trust to create dynamic, fully customized light shows for the South stand. One of the applications of the new lighting system is matching the lights to colors of sports teams to help create an exciting atmosphere — at the recent All Blacks vs. Wallabies Bledisoe Cup match, the light fixtures were programmed with a light show featuring both teams’ colors. Since the completion of the lighting installation in 2011, the Eden Park Trust has been able to control the ambiance of the stadium at the touch of a button. Thrilled with the outcome, Tracy Morgan, General Manager of Sales & Marketing for the Eden Park Trust says, “Creating a solution for the South stand that was visually interesting was important to us — it needed to have the “wow” factor and Philips delivered exactly what we were looking for. The solution provides a visual spectacle for people passing by or attending the games and adds to the atmosphere.” 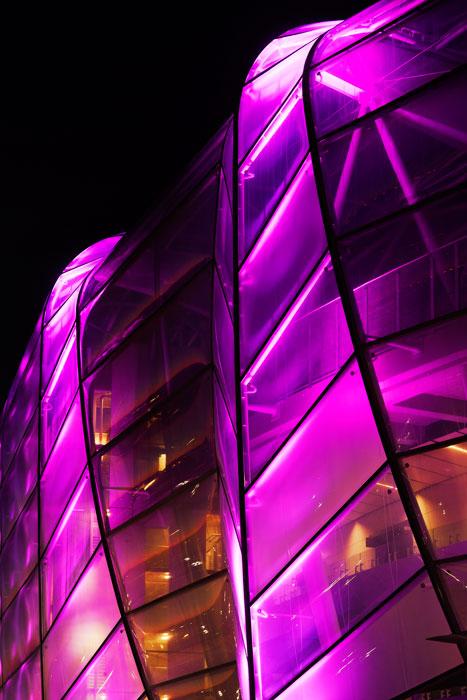