Every year in Denmark about 400.000 bicycles are discarded. Niels Bonefeld and Henrik Mortensen identified a chance in this problem and decided to take action. They figured out how to collect, repair and reuse some of the Denmark’s scrapped bicycles and send them to Sierra Leone and Mozambique. They created a schema that links a bicycle rental shop in Copenhagen with micro-loans in Sierra Leone and Mozambique. In this way, Baisikeli avoids the waste of resources and contributes to the development of different countries. At the beginning Baisikeli stumbled upon some bureaucratic hurdles, as the police could not allow the founders to collect the unclaimed bicycles from the lost property office. However, Denmark’s insurance regulations helped the Baisikely team to accomplish its objectives. Every bicycle that is reported as stolen and found after the owner has been compensated is given to the insurance company. Apparently, the large amount of lost and found bicycles became a nuisance for the companies, which were happy to give the bicycles away to Baisikeli instead of stockpiling them. A quote taken from the Baisikeli website explains the position of an insurance company: “We get great number bicycles from the police every year. The bicycles has typically been stolen and customers compensated. Later the bicycles turn up somewhere and are given back to Codan. Instead of piling up the bicycles, we support a very good purpose by giving away the bicycles to European Baisikeli.” (sic) 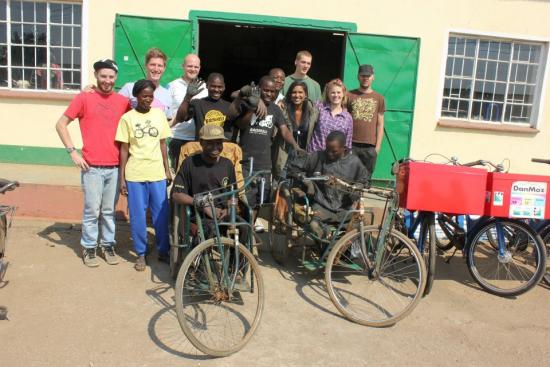 After making a first shipment of bicycles to Sierra Leone, it became clear that Baisikeli needed an additional source of income to be sustainable in the long term. Thus, Bonefeld and Mortensen opened a non profit workshop in the center of Copenhagen, where they repaired second hand bicycles that were either sold or rented to tourists, companies or exchange students. The revenue allowed the team to open a second workshop is Sierra Leone. The workshops in Sierra Leone and Mozambique sell bicycles using a micro-loan schema created by a local bicycle mechanical. This schema allows the locals to buy the second-hand bicycles and pay for them in a six-month period. Parallel to this activities, the members of Baisikeli travel regularly to the workshops and exchange knowledge about mechanics, administration and logistics with their partners in Africa. The long term goal of the project is to start the production of bicycles in Africa and contribute to the development and the mobility of the involved countries. http://www.baisikeli.com/ Credits: Video: henrikkaos – www.youtube.com/user/henrikkaos Pictures: Baisikely – www.baisikeli.com